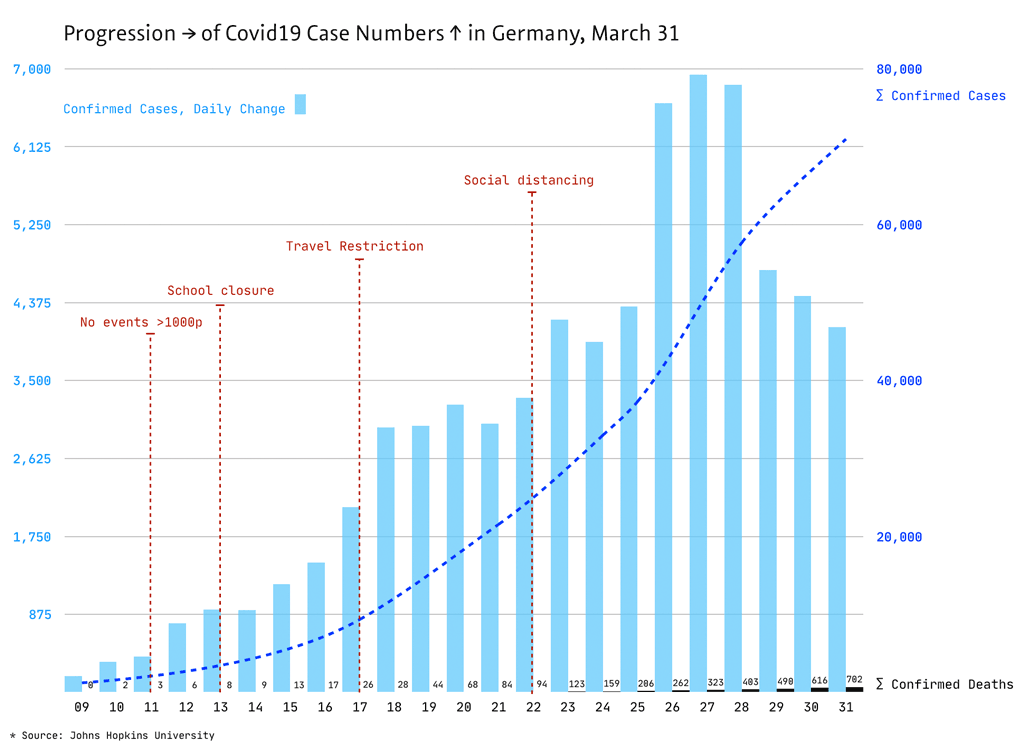 New visua­li­sa­tion of the corona spread in Germany: the daily new cases (bars), sum of the regis­tered cases (dotted line), sum of the dead (black) … in between the poli­tical measures to curb the spread

End of Day Summary (21). Apart from my scien­tific streak, it’s mainly my inte­rest in design that has led me to build my daily coro­na­virus statis­tics. That’s why I have rethought and reor­ga­nized my style of visua­liz­a­tion today. After more than three weeks with steeply rising expo­nen­tial curves the daily devia­tions in the lower part of the coor­di­nate systems are hardly noti­ce­able. My focus are now the daily changes, not the fore­casts, which can still be seen in the table, as well as the growth rates. The table is now at the end of the article.

The first figure (above) shows the increase of the regis­tered Covid19 cases in Germany, from March 9–31. The focus is now on the daily new cases (bars), where the flat­tening of the infec­tions is more appa­rent than in the dotted curve with the summed cases. The deaths (black bars) at the bottom of the chart seem a bit lost … I would like to change that in a revi­sion soon. Particularly when looking back over an entire month, it is helpful to fade in the poli­tical measures, some of which at the end of the month seem much further away than they really are. 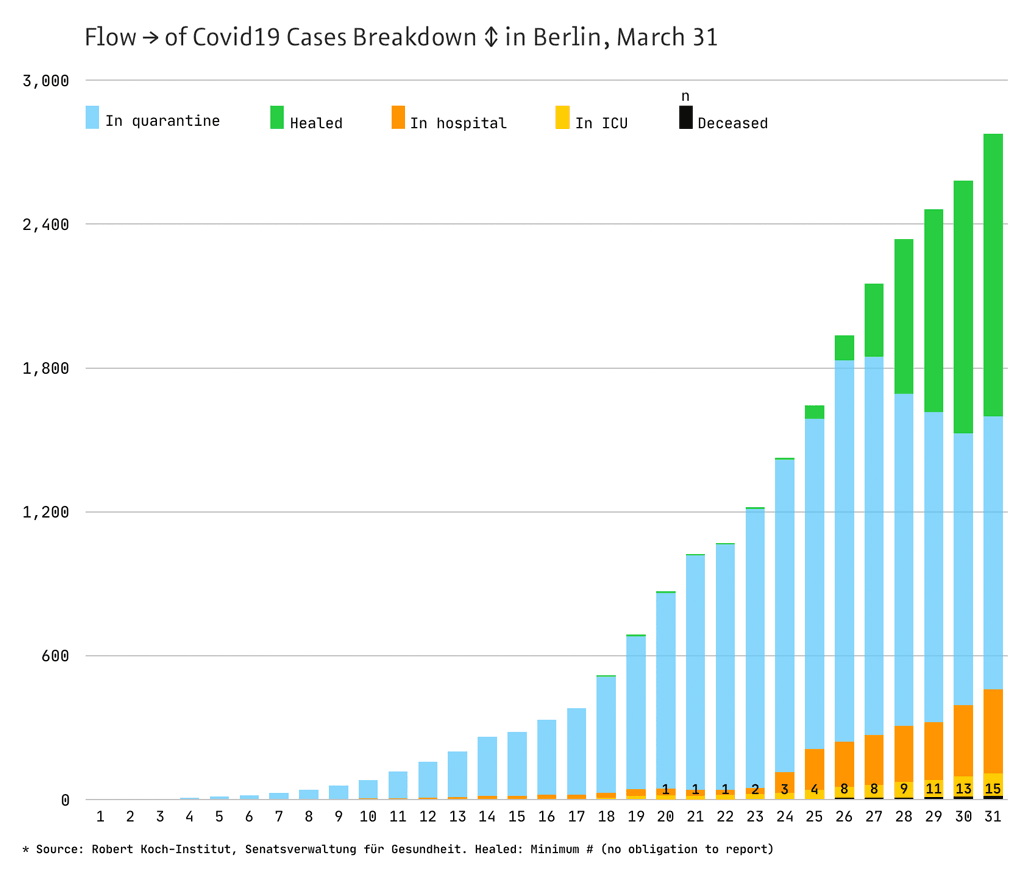 The second picture (above) is dedi­cated to the coro­na­virus condi­tions in my home­town Berlin. At the sugges­tion of some Twitter follo­wers, I have now added up the total number of regis­tered cases against 5 subgroups: the cured (green), the people in domestic quaran­tine (blue), the Covid19 pati­ents (orange), the severe ICU cases (yellow) and the deaths (black with figures).

You can hardly see it in this presen­ta­tion, but in the table below: The growth rate in Berlin today decre­ased from ×1.4 to ×1.2 (related to 3 days), which corre­sponds to a doub­ling of regis­tered cases in 9.5 days. On Saturday, Angela Merkel set the goal “doub­ling in 10 days” … behold: We are slowly approa­ching this threshold. 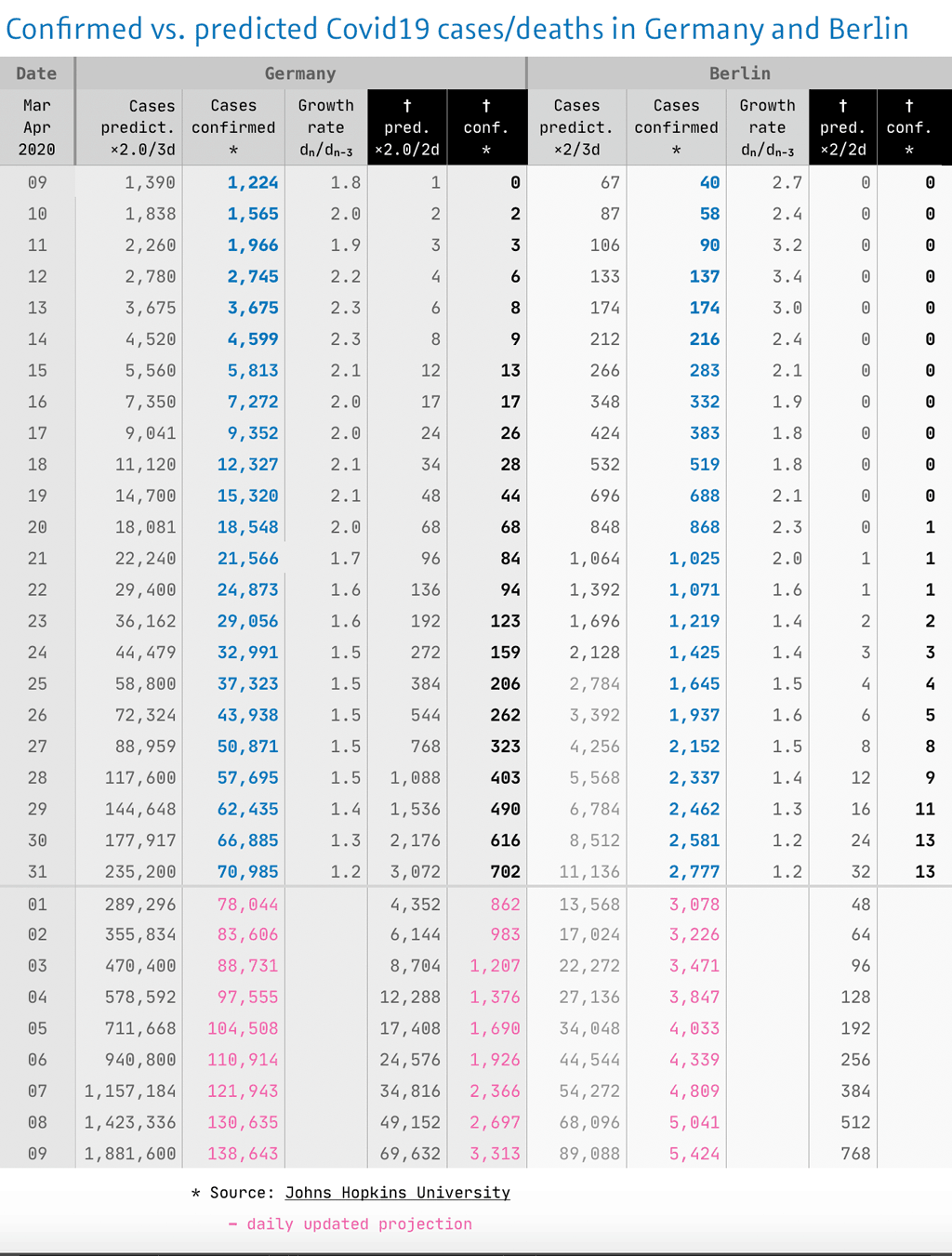 Today, the number of regis­tered cases in Germany has risen by 4100, and thus the deve­lo­p­ment has slowed down again, what is also reflected in the growth rate, which falls by 0.1 for the fourth time: from ×1.5 (Sat), to ×1.4 (Sun), to ×1.3 (yesterday) to ×1.2; this corre­sponds to a doub­ling in 9.5 days, which can today really be consi­dered a success of the distancing measures.