My main moti­va­tion for this personal statistic series was the desire to know and deter­mine the changes in the regis­tered cases and the course of the Covid-19 disease. From the media we learn daily maximum numbers and changes to the previous day. But only when we look at a long-term obser­va­tion and inter­pret it correctly can we join in the discus­sion about the rela­xa­tion of poli­tical measures.
Since yesterday I have inte­grated two addi­tional curves into my statis­tics. One (light blue) shows the course of the percen­tage changes compared to the previous day, the other one shows the change of the Basic Reproduction Number R₀ (dark red) as reported by the Robert Koch Institute (RKI). 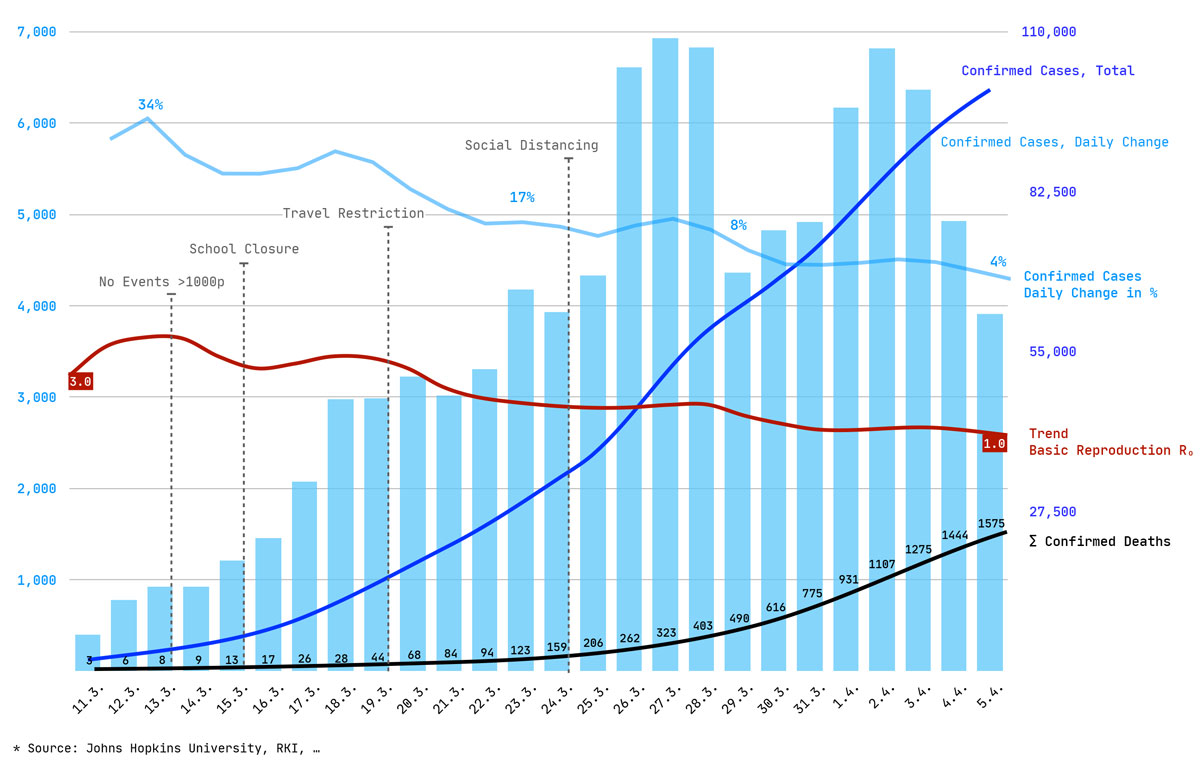 Sum of confirmed cases (dark blue curve): The deve­lo­p­ment of this amount/number is suitable for showing a country-specific course of the epidemic, but not for inter­na­tional compa­ri­sons.  The number of cases depends mainly on the number of tests. However, the number does not say anything about the actual amount of infected persons. Its disad­van­tage is that when the quan­tity of tests is incre­ased, the curve loses its power as a sample. Another draw­back for the statis­tics: the curve rises and rises, often due to the increase in tests alone, and due to the large total number of cases, the desired flat­tening can hardly be detected.

Daily change of confirmed cases (light blue bars): A change can be read much more directly from the course of the daily new cases regis­tered. However, the disad­van­tage built in here is that with the steady increase in the total of regis­tered cases, the abso­lute numbers of the daily plus are also incre­a­sing. Example: If we are in the double digits, the increase of 20 cases from one day to the next sounds small … but it means +50% if there were 40 cases the day before. The jump from 10,000 to 11,000 cases is equi­va­lent to 1,000 new cases, but only a +10% increase. Conclusion: Percentage is the solution.

Daily change of confirmed cases [%], Doubling time (light blue curve): The percen­tage change in the number of new daily cases most visibly illus­trates any trend reversal in the case numbers. Based on the percen­tage, the doub­ling time of the virus can be calcu­lated very quickly (see also Fontblog: Ganz einfach die Ausbreitung des Virus ausrechnen). To do this, divide 72 by the percen­tage of the daily change: 72/Δ%. With the recent 4% (April 5), the current doub­ling time is 18 days.

Basic repro­duc­tion number R₀: The basic repro­duc­tion number of an infec­tion can be thought of as the expected number of cases directly gene­rated by one case in a popu­la­tion where all indi­vi­duals are suscep­tible to infec­tion. The defi­ni­tion describes the state where no other indi­vi­duals are infected or immu­nized (natu­rally or through vacci­na­tion). R₀ is not a biolo­gical constant as it is also affected by other factors such as envi­ron­mental condi­tions and the beha­vior of the infected popu­la­tion. Since I have no possi­bi­lity to calcu­late R₀, I use the data of the RKI. 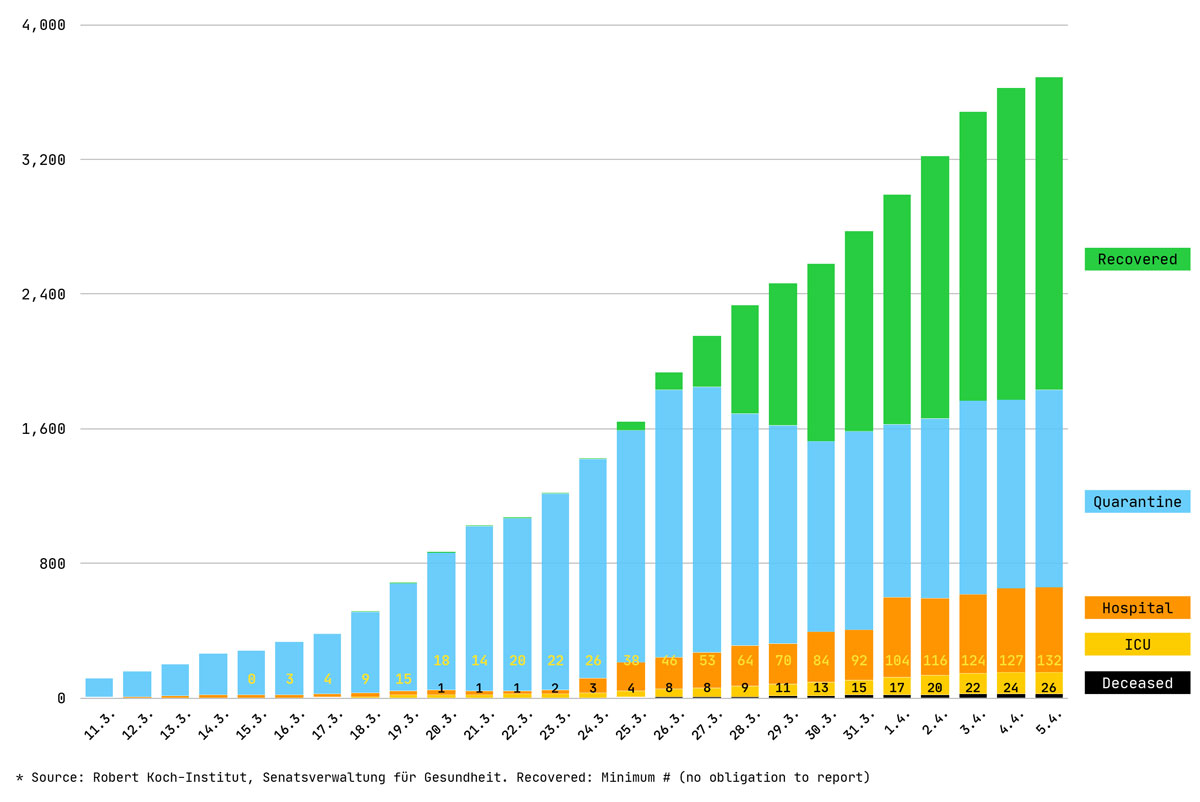 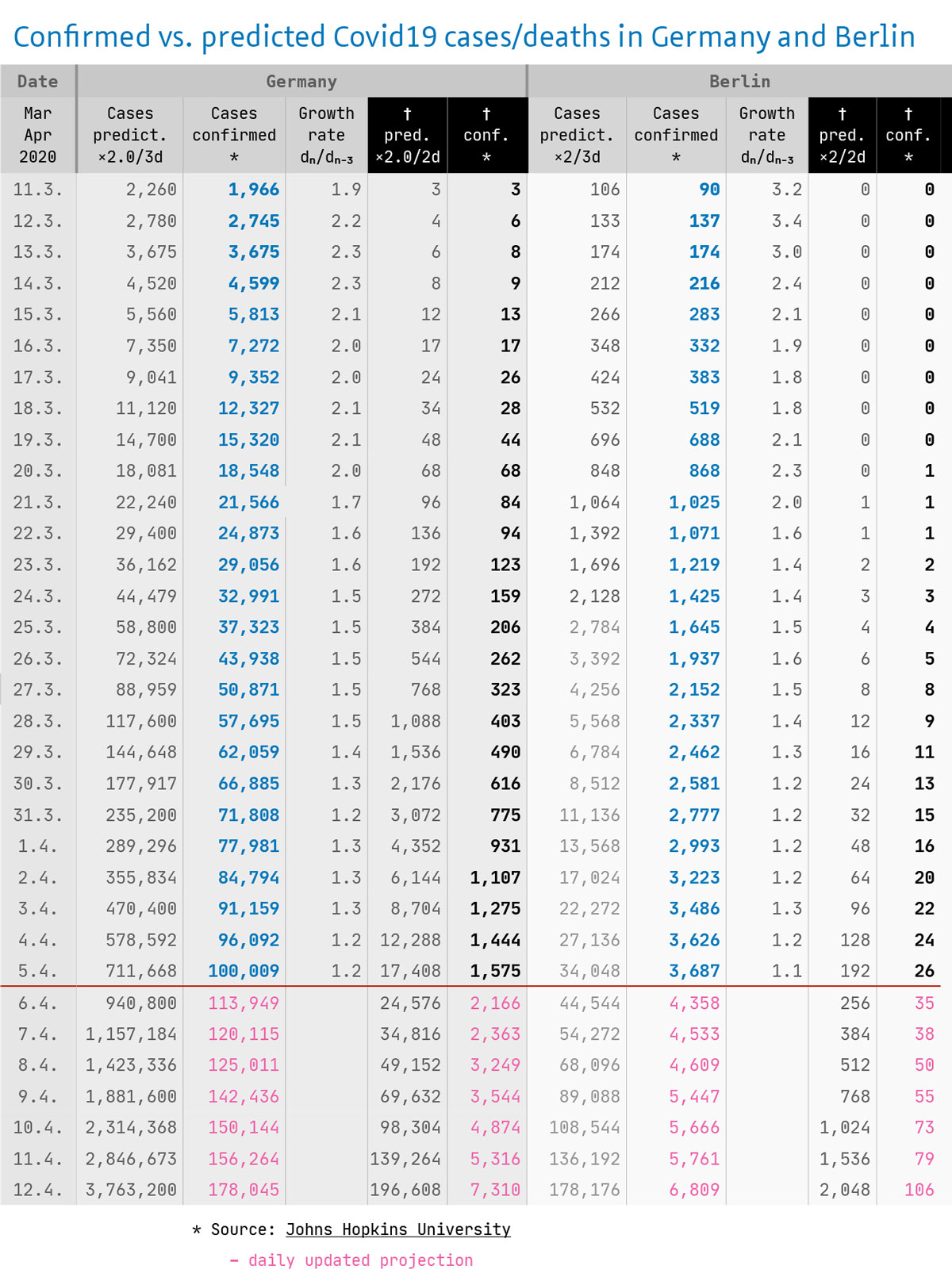