Attempt to understand the US coronavirus situation 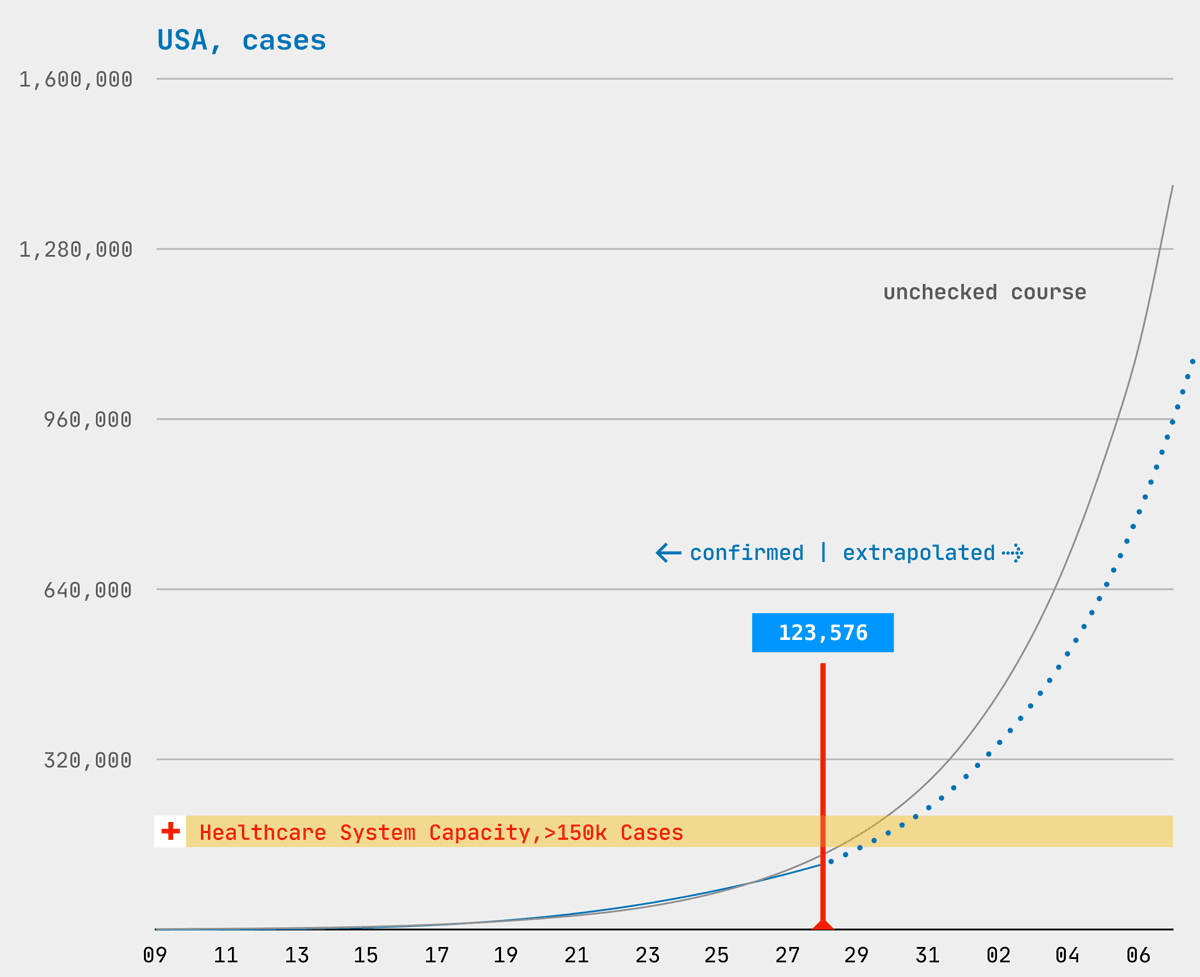 The number of infected people in the USA is explo­ding almost unche­cked: with 123k regis­tered cases today, Sunday morning, they are 30k higher than in Italy and 42k higher than in China. My mathe­ma­tical model, which I built for the obser­va­tion in Germany, does not work for the US numbers. So I have reba­lanced it, like a bathroom scale that is suddenly to be used for weig­hing an apple harvest weig­hing tons.

The general condi­tions in the coun­tries that are curr­ently very strongly affected by corona – USA, Italy, China, Germany, Spain, Iran and France – differ extre­mely. There are a handful of varia­bles, some of which are unknown or cannot even be put into figures:

• Start of the epidemic (first case detected)
• Age struc­ture (demo­graphy)
• The tests (when, how much, who is tested)
• Quality of health­care (see also Fontblog: Some Interactive Coronavirus Maps
• Politics

We know from the media that the rela­tive number of tests in the USA is lower than in Germany … which leads to a compu­ta­tio­nally high death rate (too few regis­tered cases vs. very precisely regis­tered deaths). Experts also believe that the reac­tion of US poli­tics to the crisis came too late and that the president’s zigzag­ging course exacer­bates the situa­tion. In some regions, for example New York, the health care system has already reached its limits.

To adjust my table to US condi­tions, I have read­justed the first column. It shows the unche­cked deve­lo­p­ment of corona infec­tions, as it can be calcu­lated from inter­na­tional obser­va­tions in the last months: doub­ling of cases every 3 days. Here it is important to know that the number of regis­tered cases of course does NOT reflect the number of infected persons, because not the whole popu­la­tion is tested every 3 days, but rather a sample value, which nevertheless results in a rela­tive growth trend, and is there­fore suitable as a basis for poli­tical decisions.

Yesterday’s coro­na­virus spreads­heet: regis­tered Cases and Deaths in the USA

Assuming that the amount of testing in the US has been ramped up day by day since the begin­ning of March and that it is quite resi­lient, I have norma­lized my first column to the first 3 days of last week, i.e. March 23-25. You can see from the yellow high­lighted fields that they show the same values in column 1 and 2: theory and prac­tice are put on the same level. Starting from these three days, I extra­po­lated the projec­tions of the first column into the past and into the future … i.e. I stret­ched the doub­lings per 3 days in the table up and down.

In retro­spect, on some days the unreal moment arises that the number of regis­tered cases is higher than the actual sprea­ding speed of the coro­na­virus … which is simply because more tests were carried out and for this reason alone, the number of regis­tra­tions incre­ased. However, it is much more important to look into the future, i.e. the ques­tion: is there a gap between projected cases and actual cases? Or, to put it another way: are the measures ordered by poli­ti­cians taking effect?

The good news is that the growth rate of regis­tered cases is also decli­ning in the US, from 2.0 in the last 3 days, to 1.9 and yesterday to 1.8. Considering that the amount of testing conti­nues to increase, the dece­le­ra­tion of infec­tions could even be below 1.8. 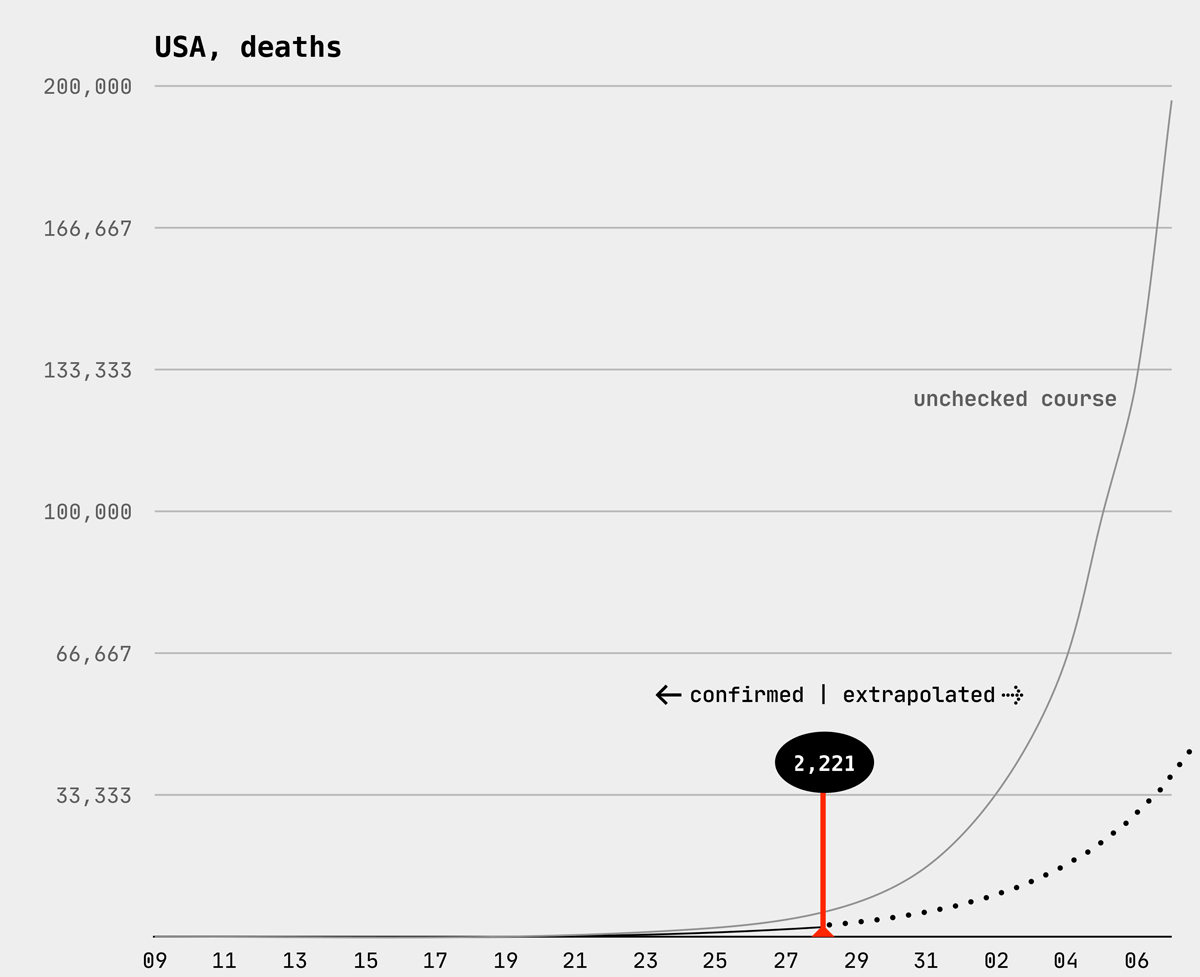 The trend in deaths in the US is similar to that in Germany, but with a growth rate of 1.7 it is two tenths higher than in Germany (1.5).